Die Geschichte meiner Frau (The Story of My Wife, A feleségem történe)

Die Geschichte meiner Frau (The Story of My Wife, A feleségem történe) 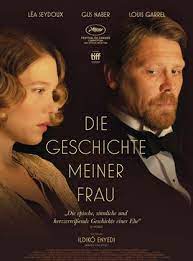 Dutch ship captain Jakob Störr (Gijs Naber) sits with his friend Todor (Sergio Rubini) in a café, talking about practical problem solving, saying “being married helps against stomach aches.” What better way to solve the problem of bachelorhood, than to ask the first female who enters the café for her hand in marriage. This unsuspecting woman is Lizzy (Léa Seydoux) from France. On their wedding night they play strip poker. Guess who stands naked in the end. The honeymoon is short as Jakob (also called Jacques by Lizzy), must board ship, to return in four months. In this relationship Lizzy either spends time alone, or sits in restaurants with Jakob, while he talks to friends—also a lonely experience. Later, Jakob takes on the management of a fancy cruise ship, the Marietta, and sails off to Alexandria. They also take up residence in Hamburg. Their relationship suffers; there is a new woman named Greta (Luna Wedler), a new man named Dedin (Louis Garrel). Is Lizzy having an affair? What about Jakob? Lizzy strives for more independence and demands money. Perhaps Jakob should take on a land job. Perhaps he should just jump into the water and disappear.

Based on the book by Hungarian Milán Füst, which first appeared in the 1940s, female director Ildikó Enyedi, also Hungarian, unveils the “life” (not “wife”) of a man. It takes place in the 1920s with horses and buggies and old-fashioned cars. The characters smoke a blue streak; I wanted to ask the cinema personnel to “open a window.” The plot is divided into seven chapters under the overall title “The Floundering of Jakob Störr in 7 Sections.” The chapters also have titles such as “Our Attempts to Control the Uncontrollable,” or “On Losing Control” or “Power of Sensuality” or “On Chasing Reality.” Part seven occurs seven years later with a wrap up of the situation. There is repetition and the 168 minutes are about 30 minutes too long. Filmed in interesting environments in Hamburg, Budapest, and Malta, it opens with a scene of the sea. In Hamburg Jakob is often seen walking across a bridge. The languages switch between English, French, and Dutch, and Gijs Naber seems to be fluent in all three. This is the type of film which serious film fans can discuss and compare to Enyedi’s prior film Body and Soul which won the Golden Bear at the 2017 Berlinale. The Story of My Wife premiered at the 2021 Cannes Film Festival, as well as at the Filmfest Hamburg 2021 a few days before opening to the general public. Four German institutions contributed financial support. (Becky T.)