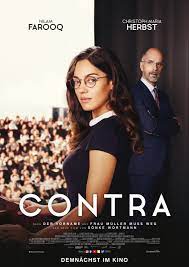 It is the first day of a new semester for freshman students at the Johann Wolfgang Goethe University in Frankfurt. Law professor Richard Pohl (Christoph Maria Herbst) speaks before a full classroom, when student Naima (Nilam Farooq) interrupts, arriving late and searching for a seat. Professor Pohl criticizes her misbehavior, using racist terms to emphasize his displeasure. The president of the university, Alexander Lambrecht (Ernst Stötzner), learns of the event via a video; he calls in Professor Pohl to account for this behavior, which could possibly lead to losing his job. Naima is participating in a debate competition, as a means of updating her qualifications for an internship. As a solution, in order that teacher and student come to terms with each other, Professor Pohl will advise her; they begin to work together. Professor Pohl considers debating to be an art form, saying, “Most important is to convince others.” Or “with rhetoric one convinces and proves to be correct.” We learn that “debaters are rappers without music,” i.e., acapella. How about debating about the death sentence or whether Islam is a dangerous religion? Naima participates in the eighth-, quarter-, and semifinals in Leipzig, Berlin, and Cologne, to reach the finals in Frankfurt. Interspersed between long practice sessions, we learn about Naima’s Arab heritage. She lives with her mother, and two brothers. Her grandmother wears the traditional long skirt and headscarf. Her brother Junis (Mohamed Issa) has trouble with the law. Her boyfriend Mohammad, whom she calls Mo (Hassan Akkouch) is a taxi driver, just got his German citizenship, and constantly refers to his new diet: “Kartoffeln” (potatoes).

The word “contra” suggests “against” and can be used in all ways of life, not only as one half of a two-sided argument or debate. We “debate” about whom to vote for in the next election or which ice cream is better: vanilla or chocolate. Debating can be used for one’s own advantage or to improve relationships, as well as jobs, politics, or economics. In the film there is always some form of “contra” involved during interaction between Pohl and Naima, between Pohl and Lambrecht, between Naima and her various family members, her boyfriend, or another boy, Benjamin (Stefan Gorsky). Eleven songs carry the spirit, with the song “Use Me” occurring more than once. Imagine the “contra” in that song. This is one of the best films I have seen in 2021. Not only excellent acting, but subtle references, which require concentration. I could watch the film several times and learn something new each time. Booked as a comedy, it is based on the film Le Brio directed by Yuan Attel, which showed in Germany 2018 under the title Die brilliante Mademoiselle von Naila. (Becky T.)