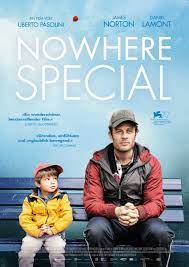 John (James Norton) is a 34-year-old window cleaner in Belfast, Northern Ireland. More important than his job is the care of his son Michael (Daniel Lamont). As a single father, whose wife abandoned them shortly after Daniel’s birth, his priorities are obviously different than those of other young men. Michael, at age three, is cheerful, vivacious, lively and curious; he keeps his father in full action. But the situation becomes serious: John has been diagnosed with cancer with probably only a few months to live. The priorities are tight: he must find substitute parents willing to adopt his son. It’s quite important that he investigate possibilities and chose the correct home for Michael. We accompany the two as they visit various couples in different circumstances, some already having experienced raising adopted children. Parallel we watch as John enjoys every precious moment with Michael, as these moments become rare. He says, “You won’t see me, but I’ll always be with you.”

Director Uberto Pasolini took the idea for Nowhere Special from a true story of a man searching for a home for his child. The film is heart-breaking, but also full of love. There are thoughts about death, responsibility, future, care, etc. but the main topic is love. And what does “adopt” really mean? James Norton plays a poor, white, uneducated, tattooed man very well, but the real reason to watch the film is young Daniel Lamont, just four years old and in his first film, so much talent in these 96 minutes! In the English presentation, all speak with a warm Irish accent. Nowhere Special premiered at the Venice Film Festival 2020, and then showed at the Filmfest Hamburg 2020. It is a candidate for a European Film Award 2021, to be announced December 11, 2021.  (Becky T.)