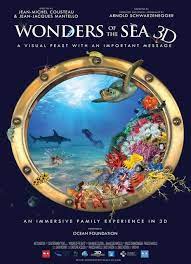 Jacques Cousteau’s name is synonymous with diving, oceans, wonderment, and fascinating facts and footage of the world’s seas. Arnold Schwarzenegger introduces Wonders of the Sea 3D, and then, as befits family tradition, Jean-Michel Cousteau talks about father Jacques being a pioneer in the art of diving, and the development of underwater cinematography. His parents awoke a mutual love in oceanic exploring when, at age seven, Simone strapped an aqua-lung on her son. Carrying the tradition forward, Celine Cousteau and Fabien Cousteau join dad on this excursion.

First port of call: Fiji Islands archipelago. It is the most extensive, complex coral reef ecosystem in the South Pacific, and the fraction seen shows a wealth of stupendously eye-popping beauty. To name a few: Christmas Tree worm coral; clown fish, a mussel approximately 200+ years old, star fish, extremely dangerous red lionfish, a turtle as big as a man, and plankton exposed by diving on moonless nights. Voyaging from warm waters to the colder Pacific along California’s coast to Baja, Mexico, umpteen visual treasures from different types of coral and playful dolphins to sea cucumbers and snails, crabs, and deadly scorpion fish are shown. At Nassau, Bahamas, the adventurous, intrepid Fabien and Celine swim with sharks. Nevertheless, Jean-Michel is determined not to miss an appointment that occurs but annually. And, we do not.

Cinematographers Gavin McKinney (like one of the family) and Jean-Jacques Mantello’s stunning visuals attest to patience, e.g., waiting for the shy worm coral to open. Enzo Mantello edited the different ports of call into a fluid voyage that Christophe Jacquelin’s music accompanies. The film is obviously directed towards drawing attention to the dire condition of the world’s oceans with its facts, figures and hard realities, e.g., visuals of dead coral. Alternatives and possible solutions are put forward; for some viewers it could even set a career path. Wonders of the Sea 3D is awesome viewing entertainment for the whole family to enjoy. 82 minutes (Marinell H.)