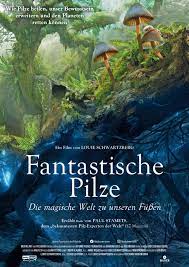 We are familiar with edible mushrooms; they are often on our pizza or in our soup. But what about the more than three million other types of mushrooms, also known as fungi? What about the ones that have not yet been discovered in the world? American Paul Stamets is a leader in the field of mycology, or study of mushrooms. He wanders for hours in ancient woods, e.g., in the Pacific northeastern part of the USA, looking for new sorts. The largest and oldest fungi was found in Oregon, USA. Stamets has written six books, including Fantastic Fungi which has also been translated into German. Film director Louie Schwartzberg relied on the knowledge of Stamets, as well as scientists Michael Pilan, Eugenia Bone, and Andrew Weil to create a fascinating film about a world of mushrooms, which are more “human” than plantlike, “a world under our feet which unites all living things.” Schwartzberg said, “My mission is to decipher the language of nature.” We learn how mushrooms influence the cycle of nature, including oil catastrophes, dying bees, human brains, or even pandemics. We see Alexander Flemming working with fungi to create penicillin in 1927.

Occasionally the scientific information was difficult (for me) to comprehend, discussed in very intelligent terms in both the English version as well as in the German subtitles. However, there are light moments such as Stamets talking about solving his problem with stuttering. The film is valuable for the beautiful filming of mushrooms growing fast-forward out of the earth in different forms and colors, all of which I had never seen before. Fantastic Fungi is a must-see film for everyone. Biology teachers can treat their high-school classes to this opportunity – a valuable enhancement to their education. (Becky T.)