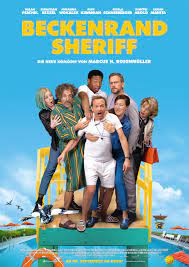 For the last 30 years Karl (Milan Peschel) has managed the swimming pool in Grubberg, a small town in Bavaria. He works scrupulously, chasing the ducks from the water or lining up deck chairs precisely. He is a true “sheriff” in charge of order, in spite of the pool being rundown with few guests. The town mayor (Gisela Schneeberger) and the local building contractor Albert Dengler (Sebastian Bezzel) plan to demolish the pool and build new apartments. In order to save it, Karl desperately begins collecting 600 signatures, as well as money. Helpers are Frau Wilhelm (Johanna Wokalek), who overseas an eight-man, water-polo team, Lisa (Sarah Mahita), who swims illegally at night, and his new co-worker, Sali (Dimitri Abold), a refugee from Nigeria on his way to Canada. Lisa has won professional swimming competitions; she begins teaching Sali how to swim. Karl and Frau Wilhelm discover a common interest: working puzzles. For every donation to keep the pool in existence, Karl puts a piece into his puzzle.

This humorous German film opens with a quote from Klaus Tucholsky, “Freundschaft, das ist wie Heimat” (“Friendship: that is like home”). Beckenrand translates to “edge or side of the pool.” There are two parallel love stories, which you can predict. I saw the film in German and occasionally I had to guess my way through some Bavarian dialects, but the plot is predictable, so this is not a problem. The film touched me personally, having worked several years as a lifeguard and swimming instructor in a small town in Missouri, USA. Also, both Karl and I like puzzles. Here, we have much to smile about, especially over the facial expressions of talented actor Milan Peschel. Perhaps the film loses momentum occasionally, but it picks up for a happy ending, thanks to the ducks! (Becky T.)