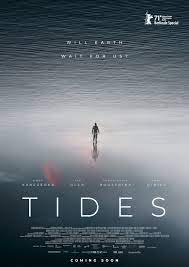 In the distant future, the space-faring survivors of the collapse of Earth seek to discover whether the planet has recovered enough to sustain life. Years earlier, the mission Ulysses disappeared without a trace. When the second mission, Ulysses 2, crash lands, astronaut Blake (Nora Arnezeder) must find a way to survive and complete the mission.

Although Tides impresses with its cinematography and production design, the unfortunate reality is that those two aspects cannot save it from being a wholly mediocre film. The story is derivative of practically every dystopian sci-fi produced in the last thirty years (Waterworld [1995], Children of Men [2006], Interstellar [2014] in particular). The motivations of the characters are particularly cookie-cutter, to the point where it almost feels like you could guess the dialogue before it was said. With the addition of uneven pacing, the end result is a rather boring feature which is all style and no substance. (Rose F.)