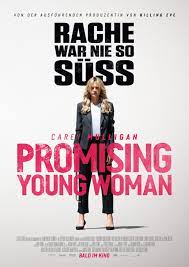 Cassandra (Mulligan) is a troubled young woman whose promising life was derailed by a tragic incident while she was studying to become a medical doctor. A decade or more later we are introduced to Cassie (Cassandra) now pushing 30, a medical school dropout, living with her parents, working in a coffee shop and seemly doing not much else with her once promising future. What we very quickly learn is there is much more going on in Cassie’s life. Her heart is full of revenge for the events that lead to her current predicament. Most evenings Cassie feigns drunkenness in bars and lures men into taking her to their place. Once Cassie is seemly in a compromised position and the men attempt to take advantage of the situation, she reveals that she is stone cold sober and berates the men for their behavior. This is a dangerous charade and one that we sense has eaten away at her soul.

The vendetta escalates when she meets Ryan (Burnham) and is reintroduced to the people who perpetrated the original crime as well as those who were complicit due to their action or inaction.  This awakens a new revenge plan within Cassie's fragile psyche and sets in motion a series of events that become more destructive and violent, fueled by her desire to gain revenge of varying severity on all those who were involved. Each act of revenge escalates until the final, devasting crime is committed.

This is the first feature film directed by Emerald Fennell a well know actress that you might know from The Crown series, in her role as Camila Parker Bowels.  Nominated for five Oscars including best picture and best actress this is worth your time. The topic is topical and important for all genders to bear witness. If this had the tag ‘based on a true story’ I would not be surprised. (Christine R.)