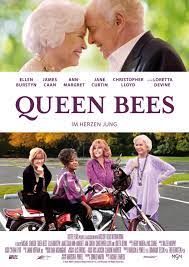 Now retired, Helen (Ellen Burstyn) tends to flowers, and memories, that thrive around her tree shaded ranch-style home. Only grandchild Peter (Matthew Barnes) visits regularly, since Laura (Elizabeth Mitchel) and Helen’s relationship has been testy ever since granddad died. After Helen has a minor mishap, Laura and Helen decide she should stay elsewhere while repairs are made. Which is how Helen ends up at Pine Grove, a rather swanky independent senior living facility Helen abhors and Laura enthuses about; the manager (French Stewart) guarantees her mom’s happiness. Naturally, Helen hears about the “Queen Bees,” – “B is for bitches,” and, with every encounter they live up to their reputation. In spite of that, Helen agrees to be Sally’s (Loretta Devine) new bridge partner that Margo (Ann-Margret) agrees to—she is too involved in Arthur (Christopher Lloyd) to mind, but Janet (Jane Curtin)—the queen of Queen Bees—opposes. Unsuccessfully. Around this time, a new, single man (James Caan) arrives, and Dan wastes no time in making Helen’s acquaintance. Dan matches Helen’s dry wit thus gets on her good side; as well, Helen’s other friendships, particularly with the massage therapist Lito (Alec Mapa), keep her preoccupied. Just when things seem rosy, Janet pulls a total bitch move.