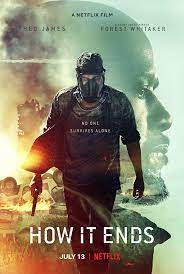 It’s the last day on Earth before a giant meteor is forecasted to hit the planet. Liza (Zoe Lister-Jones), accompanied by the metaphysical representation of her younger self (Cailee Spaeny), sets out to make the most of her time left by redressing some of her greatest regrets before attending the party to end all parties one last time.

The film chronicles their awkward and, at times, hilarious encounters throughout Los Angeles as they redress grievances with their parents (Bradley Whitford and Helen Hunt), ex-boyfriends (Lamorne Morris and Glenn Howerton), and former best friend (Olivia Wilde), often getting sidetracked by random encounters of quirky people and other younger selves along the way. The film is well cast with an eclectic and strong representation of stars, some playing themselves, but it is the relationship between Liza and her younger self that really drives this film. Lister-Jones and Spaeny work wonderfully well together and make this unusual relationship easily accessible and quite touching.

Written and produced during the 2020 quarantine, the film makes the most of the once in a lifetime empty LA streets. Such a setting, coupled with the sparse characterization the situation demanded, gives the film a surreal, yet oddly familiar vibe that complements the impending apocalypse. Some scenes were shot in actors’ own gardens, apparently an attractive option for pandemic filming. While some have criticized this gives the film an overly minimalist or low budget feel, I thought it seemed almost normal after spending so much time alone this past year.

I loved how much fun Lister-Jones and Wein seemed to have with this project, which has a decidedly millennial tone in its constant self-examination and gift for making awkwardness endearing. Stuck at home like everyone else, this husband-and-wife duo did what many of us were forced to do: think about what really matters in life. How It Ends is a smart and bitingly funny examination of what it means to truly accept ourselves and the importance of making every moment count — right down to the last hour. It was the perfect big screen post pandemic film for me. 82 minutes (Adelina G.)