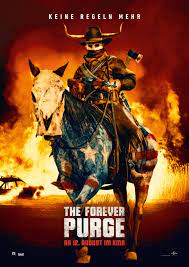 I never expected that my first film I would see after the pandemic would be this film—The Forever Purge. Not only that, but it was my first Purge film!  That’s right; I felt like an innocent virgin waiting on the sidelines to witness the annual bloodbath. I have to say I was totally unprepared for the topic and should have read the description but instead found myself screaming at every unpredictable moment in this fifth and final installment of the American dystopian horror film franchise. Later, I learned that The Purge franchise consisted of five films that should be seen in this order: The First Purge (2018), The Purge (2013), The Purge: Anarchy (2014), The Purge: Election Year (2016) and this one: The Forever Purge.

On Mr. Tucker’s (Will Patton) ranch, a wild stallion can’t be broken by his son Dylan (Josh Lucas) but is instantly charmed by a Mexican cowboy, Juan (Tenoch Huerta) who has the true talents of a horse whisper. Juan’s success sparks a rivalry between the two which foreshadows a dark future. Mr. Tucker hands envelopes of money to his team to secure a safe haven for them during the annual purge. So, what is this annual purge? Much to my surprise it looks like a night where all hell breaks loose and anything goes. According to the Purge series, this is an official celebrated national holiday where the New Founding Fathers of America (NFFA) have the rights to eliminate those who don’t belong by using violence. Since this film follows the film The Purge: Election Year, it clearly suggests that it is a white supremacy movement. The next day, Adela and Juan head of to work, realizing that a new group called themselves the Purge Purification Force (PPF) is continuing on with the killing and a new set of rules. Juan and his people along with the Tuckers team up to save themselves but where should they go? Should they head to Mexico and face the drug cartels or stay in the US and fight the PPF which has now spread across the US?

The film is suspenseful, violent as well as including political and moral messages. My feeling is this film was made as a reaction against the Republican Party, but now the Democrats have been elected and the future is bright Also, due to the timing of the pandemic, this film has lost its political impact. It’s still a scary horror film and supposedly the last and final film but this I doubt. American politics are always swinging back and forth and there are always producers out there in the wings who see a money-making possibility. (Shelly S.)