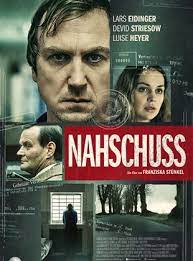 Life is looking rosy for recent university graduate Franz Walter (Lars Eidinger): a job plus gorgeous girlfriend, Corina (Luise Heyer), and then, it gets better with a job offer too good to refuse from the national intelligence service. Uniformed about what the position entails, under his seasoned superior Dirk’s (Devid Striesow) tutelage, Franz quickly realizes the full range of duties expected from an undercover informant are, also, contrary to his nature. Nevertheless, the job absorbs his lifestyle; his best friend (Hendrik Heutmann) is not present at his wedding; being young Klara’s (Paula Kalenberg) handler is discomforting. Franz’s attitude deteriorates; alcohol numbs his feelings, until caustic criticism shapes his very words and actions. Seeking a way out, he instead attracts unwanted attention. Eventually deciding on a course of action the Stasi do not approve, Franz is accused of espionage.

Editor Andrea Mertens’ pacing is measured, self-assured and bows to the outstanding cast perceptibly nuanced visual expressions they stunningly project. For example, in scenes between Eidinger/Franz and Heyer/Corina where not a word is spoken, audiences know exactly what is being non-verbally conveyed. Cinematographer Nikolai von Graevenitz’s prowess excelled in style and camera angles at historical film locations chosen to exemplify 1981s conditions: the former Stasi ministry in Berlin and Hohenschönhausen prison used during DDR times, and in Hamburg, Wuppertal and Lünen. Anke Osterloh’s production design, Nils Herkendell’s art direction, Solveigh Sprenge and Jeannine Ullrich’s set decoration, and composer Karim Sebastian Elias’ creatively charged music conscientiously depict the atmospheric ambience of that period in Germany’s history. When Stünkel takes a few potshots along the way the irony is not lost on audiences: about moral dilemmas being instilled with complexities, and not to take freedoms for granted. Nahschuss brilliantly illustrates, and reminds, that any form of cage is dangerous; so many wanted only “to live life as a good (DDR) citizen.” German, 116 minutes (Marinell H.)