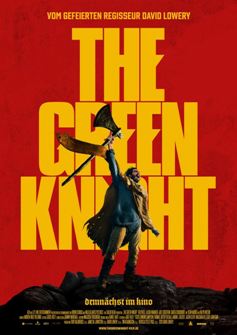 The Green Knight (Ralph Ineson) enters into King Arthur’s (Sean Harris) court with a Christmas challenge. Whosoever strikes a cutting blow against him will keep his axe for one year. After that time, he will present himself to the knight at his chapel, kneel, and accept a blow in return. King Arthur is too old and the rest of his knights uninterested, until his nephew Gawain (Dev Patel) steps and up and offers himself to the challenge. Gawain has yet to prove himself worthy, spending his days drinking and carousing rather than adventuring and performing chivalric acts. The challenge is his opportunity to finally become worthy of a knighthood and a place at his uncle’s table, but when the year is over, he may find that the cost of honor and glory is more than he is willing to spend.

The Green Knight is certainly a peculiar film. Even from the opening sequence, it is clear that one way or another, the viewer is going to be taken on a visual and aural adventure. Each shot is a painting, carefully and deliberately chosen by director David Lowery who also wrote and edited the film. Sweeping landscapes and dramatic, colorful lighting bring the mystical world of Arthurian England to life. Daniel Hart’s ethereal and disconcerting compositions are an integral part of the experience, heightening the tension and sense of foreboding. Combined with Dev Patel’s quiet and intense acting and the result is a complex and heavily stylized piece of art.

However, as ambitious and impressive as The Green Knight is, it does occasionally get bogged down with its own sense of self-importance. The script in particular is a weakness, both disjointed and overwritten. The pacing is uneven throughout, sometimes moving almost too quickly and other times slowing to a snail’s pace. The dialogue is sparse and heavily laden with symbolism to the point where its inorganic nature is distracting. In one scene, Alicia Vikander’s character opines about the importance of the color green to such lengths that it becomes more than a bit ridiculous. In particular, the failures of the script are more apparent in the hands of Vikander who does little to make the stilted writing come to life, something which becomes all the more obvious in comparison to Patel’s excellent interpretations of the text. In many ways, the script feels more akin to low-budget auteur cinema, falling into the trap of writing in a dramatic and overblown manner in order to give an appearance of depth rather than understanding that sometimes simplicity and subtlety is more effective and powerful.

Still, there is a lot to parse through in the complex story, particularly in terms of its themes of honor, good and evil, and the deliberate differences between the film and the original text. Undoubtedly, The Green Knight will become a favorite to film students and aficionados or anyone who loves to the watch artistic films which require focus and analysis. With its rich visuals, music, and themes, The Green Knight is certain to evoke divisive opinions and is not a film to miss. (Rose F.)

Another Opinion by Marinell H.

As a preliminary to viewing The Green Knight, it merits briefly considering the Arthurian beginnings. According to Welsh and English folklore legends and inventive imaginations, King Arthur, a central figure in medieval literature defended Britain against Saxon invaders around the late 5th century. During the 12th century, Geoffrey of Monmouth's Historia Regum Britanniae (History of the Kings of Britain), completed in 1138, increased Arthur’s far-reaching popularity. Supernatural elements and magical folkloric figures are central to early tales and poems, as is the then popular literary genre, chivalric romance. Thereafter, Arthurian literature was ignored until a 19th century resurgence that has carried forward to the present. In American writer-director-editor David Lowery’s re-imagining of Sir Gawain and the Green Knight, a familiar late 14th-century tale, myth and legend coalesce. Lowery’s version creatively portrays what had been merely alluded to in the original story as he fills out Gawain’s misadventures, there are two green sashes, and the rash young gadabout is uncommitted, fearful.

Gawain cleans up his act to attend Christmas festivities at the castle; King Arthur (Sean Harris) notices the absence of his sister, Gawin’s Mother (Sarita Choudhury) and invites Gawain (Dev Patel) to sit at his side. Next, the King wishes to be told a tale of exciting valor. Unexpectedly, reverberating clatter breaks the silence as a huge stead bearing a colossal earthy-green and roughly hewn figure appears. Let us not fight, the Green Knight (Ralph Ineson) declares, insisting instead on a friendly Christmas game while flourishing his spectacular axe. Finally, Gawain accepts the challenge, and, with a mighty swing follows-through on the Knight’s bidding. Upon his departure, the Queen (Kate Dickie)—in a deep, rough voice—reads out Green Knight’s declaration to meet a year hence. Unconcerned, Gawain spends the interim cavorting with Essel (Alicia Vikander) until his only recourse is making hasty travel preparations, then commencing the journey out. En route, onerous encounters with thieves, ghosts, and waylaying giants with a fox shadowing his movements vie with Gawain’s timely arrival at the Green Chapel. Happening on an imposing castle, Gawain learns from the Lord (Joel Edgerton) and intoxicatingly beautiful Lady (Alicia Vikander) how close he is; their offer of a respite he gratefully accepts. Unbeknownst, however, is that the pair’s criteria are meant to significantly test Gawain’s mettle prior to his appointed rendezvous. “We all fear… But fear can be a gift.”

Gawain’s inexperience and uncertainties make his complex journey harder, apropos the alternative ending to his story, yet each diversion is really a deeper dive into Gawain’s psyche, character. “Well done my brave Knight, now…” What ensued? Better ye learn the truth oneself. 125 minutes