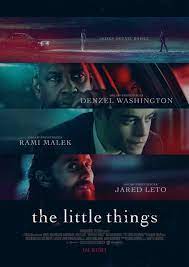 In 1990, county sheriff deputy Joe Deacon (Denzel Washington) originally was sent to LA to retrieve some evidence. Instead, he ends up teaming with detective Jim Baxter (Rami Malek) who is searching for a serial killer causing havoc in the city. This case mirrors an old case of Joe “Dekes” Deacon’s. It was the one case that left psychological scars and nearly caused an identity crisis for Dekes. After interrogating the main suspect, Sparma (Jared Leto), he was released due to insufficient evidence leaving both detectives in the lurch. The investigating team was certain they had nabbed the serial killer. With yet another girl missing, the pressure intensifies, giving them no choice but to act on their own intuition.

As a person who doesn’t scare easily, the atmosphere of dark scary scenes made me jump several times during the film. The music fitted perfectly since it intensifies the scenes even more. I thought the acting was well done by all three actors. The most impressive role was played by Jared Leto since he succeeded in making you believe he might actually be a real-life psychopath serial killer. The film discusses the difficulties of old technology used in the 90s to convict murderers, as the technology in criminology simply was not as advanced as today. They primarily used DNA, which was more often than not very inconclusive. Furthermore, it emphasizes the mental toll that an investigation on a serial killer crime has on the detectives. Witnessing mutilated bodies is not easy for any human to deal with on a daily basis. This created identity crises for the detectives, when they asked themselves more than once if they should be removed from the case while at the same time wanting to remove suspects off the streets so that they can prevent a killer from killing again. After taking things into their own hands, the movie shows the mental stress of how they suffer in their decision making.

For people who are interested in seeing thrillers this is definitely a movie for you. The film asks the viewers to decide if Sparma is guilty or not; you feel like the killer is right behind you which will slowly wear you, the viewer, down. Details are a big part of this movie and it is necessary to pay attention to them or you will have a difficult time reaching a conclusion. Missing important information will make it hard to understand the ending. So pay attention and have fun! (Adrian P. S.)