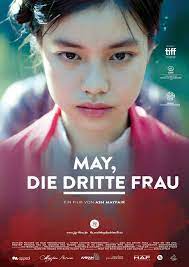 Ash Mayfair (writer/director) takes us to 19th-century Vietnam, to the silk plantation of a wealthy landowner Hùng (Lê Vũ Long). Born and raised in Vietnam, Mayfair draws on her own family history for inspiration and takes the viewpoint of 14-year-old Mây (Nguyễn Phương Trà My) who is forced to join Hùng's household as his third wife. As it was the rule, the marriage was arranged and a way for her father to pay off his debts. Until she would give birth to a son, her standing within the clan will remain subordinate, not only to all males in the house but also to first wife Hà (TrầnNữ Yên Khê), second wife Xuân (Mai Thu Hường (Maya)) and their children. Hùng isn't unkind to her, almost gentle and first and second wife treat May like a little sister while making sure to keep her in her place and teach her what is expected of her. In spite of the restrictive conditions and tragic affairs and events that are unfolding, all appears unbelievably harmonious. Each scene a picture in layers of sepia, accompanied by entrancing music, helps unfortunately to gloss over the brutality of a patriarchal and feudal society. Meanwhile silkworms feasting on fresh greens are stretching lazily under leaves—an inexplicably often-shown theme throughout this film. One might remember the film for its romantic and sensual images, less for the subject matter. I did prefer the original language version for authenticity. No content would be lost since there is little dialogue and especially the women convey all with their expressions. (Carola A.)