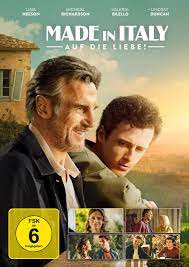 Robert (Liam Neeson) and Jack (Micheál Richardson) are so comfortably estranged, it takes adversity—desperate need of money—to make Jack take the initiative with his father. To get Robert to leave London for Italy, Jack even tolerates his carefree, and careless, lifestyle approach knowing the villa they inherited from Raffaella (Helena Antonio) is ripe for an easy (financial) kill. Only in Jack’s fantasy; in reality the stately house sat empty 20 years and it shows. The fore arranged realtor Kate (Lindsay Duncan) gives a blunt verdict, yet concedes, “I like its bones.” Putting their “back into it” gets them only so far since one likes apps, the other romance. Kate sends local handymen to lend a hand, while Jack (inadvertently) stumbles into Natalia’s (Valeria Bilello) eatery. Later, introducing Robert to it and Natalia’s garrulously friendly family—excluding ex-husband (Gian Marco Tavani), her warm-hearted nature eases the guys’ contentious stances. As the villa begins to take shape, they realize that one cannot remember the past and the other cannot forget it, yet, when the time is ripe, they “heard that whisper” and settle on an alternative.

Behind the camera for a change, writer-director James D'Arcy’s debut film is a delightful comedy. The balance between comedic and serious, the locations, and emphasis in the narrative is commendable; even at 120 minutes Made in Italy zips along. The real-life father and son team brings depth to their roles. Wonderfully cast, their affinity resonates with audiences, albeit the showstopper is Tuscany, Italy. Shot in Montalcino, cinematographer Mike Eley fondles the characters’ interactions and the essence of each setup with equal charm to capture its transformative magic. Italian ambiance and tunes beguilingly combine with Alex Belcher’s music that Anthony Boys and Mark Day seamlessly edit. Made in Italy displays a great understanding of people and relationships that proves one is never too old, or young, to learn. (Marinell H.)