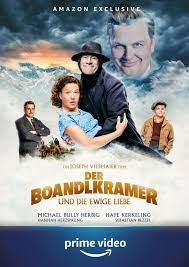 In Bavaria “Boandlkramer” is a word for “death.” The film opens with Boandlkramer, i.e. Death (Michael Billy Herbig) sitting on a wagon pulled by two horses, driving through the woods. He has just picked up more coffins containing corpses; he will bring them to hell, which is his version of paradise. He hoped to bring 12-year-old Maxi (Josef Staber). Luckily, Maxi recovers; no need to be driven to the afterlife. While waiting unseen at Maxi’s bedside, Boandlkramer also observes Maxi’s mother Geti (Hannah Herzsprung). She had been planning to marry someone (we see her in a bride’s dress on the way to the church), but the ceremony was interrupted by Maxi’s need for care. Boandlkramer falls for her. He makes a deal with the devil Lucifer (Hape Kerkeling) to give up his job and return to earth. As a result, no more people die, which creates total chaos among the population.

This is a described as a “black comedy” and it is hilarious with amazing characters (including God) in different costumes all set in a beautiful environment in and around Grongörgen, Bavaria. It is a sequel to Die Geschichter von Brandner Kasper (2008), based on an original story from 1871. It is supported by wonderful music, including Geti playing the violin. One lesson is that “laughing is the key to love.” This is my favorite film of 2020 and I look forward to seeing it again. One problem, however, is that the text is spoken in a Bavarian German accent, which is often difficult to understand, even for native German speakers. Sadly, director Joseph Vilsmaier died February 11, 2020, at age 80, too soon to experience its opening in December. (Becky T.)