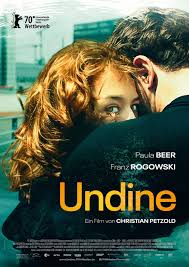 Christian Petzold’s new film, Undine, takes place in the Twilight Zone, vacillating deftly between fantasy and reality. It is a love story based on an imaginary fairytale figure, Undine, but made to come to life in the character of Undine Wibeau (Paula Beer), a state historian, working as a guide in the Humboldt Forum in Berlin. She does indeed seem to be a real person in the opening scenes. Her boyfriend has just dumped her for another woman and, like in the fairy tale, Undine resolutely tells him he cannot leave her or she will have to kill him. Not only that, she will have to return to the water and give up her human form. Actually, they both are lucky (at least momentarily), since with a slight twist of the tale, Undine almost immediately falls in love again when an “auspicious” and wet mishap with an aquarium brings her together with another water enthusiast, Christoph (Franz Rogowski), an industrial deep-sea diver. This modern day Undine is definitely different from the traditional one. She wants to break the curse and neither become a serial killer nor return to the sea.

Not only is this a love story about the water sprite, Undine, but it is also Petzold’s loving ode to Berlin as there are many delightful parallels in their tales. Just as Undine one day surfaced from the depths of the ocean, Berlin arose out of a swamp (in fact, the word, Berlin, probably has its origin in the Slavic word “Brl” which means swamp). As a historical guide, Undine describes the city’s development decisively and as if she had experienced it herself and since she is Undine, the water sprite, she has indeed lived through the centuries of Berlin’s vicissitudes. Just as Berlin was destroyed and then restored, so, too, was the cracked aquarium, the broken ceramic deep-sea diver, and Undine’s love, shattered and then repaired, if only imperfectly and for a short time. Both Berlin and Undine are searching for their identity—will they find it?

Petzold’s film has a slow but sure pace, especially in the beginning. Helping to maintain this beat is the music of Bach’s piano Adagio in D Minor, BWV 974, which accompanies us all through the film. Beer and Rogowski’s convincing performances, especially in the underwater-filmed scenes, seem to flow through the story as they gracefully swim around each other and communicate with their eyes. Here, Petzold’s longtime cinematographer, Hans Fromm, expertly maneuvers his camera catching the bluish-green tones, as he skillfully plays with extreme close-ups and underwater cinematography. Beer received a well-deserved Silver Bear for the best actress and one of her comments as she received the award was that she considers the award not just for her, but also for Rogowski—they were a team.

In the interview on “Berliner Talk 2020”, Petzold mentioned that Berlin, unlike many other cities, has no legend. He goes on to suggest that Undine might be the perfect fit for Berlin. I can only advise everyone to see this romantic and serenely humorous contemporary fantasy and decide for yourself if Undine is the right myth for Berlin as well as finding out if modern-day Undine is doomed to return to the water or can she break the curse.

If you enjoy the film, Undine, then you will be happy to know that there is more to come, since Undine is only the first part of Christian Petzold’s planned trilogy about elemental beings: water sprite, gnome and sylph. (Karen S.)