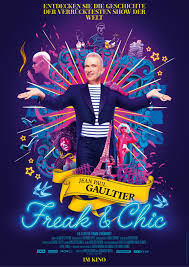 This runaway fashion show is an extravaganza! Commencing in Connecticut, USA and throughout the numerous, variable preproduction stages, Jean-Paul Gaultier’s voiceover tells his life story while collaborating with the composer, director, choreographer, dancers, top models, costumer, et al. “Freak & Chic” will exceed expectations, with Paris’ famed Folies Bergère its inspiration, and its venue. Over a two-year plus period, we glide through rehearsals, his workshop with seamstresses busy working and during fittings, and sit in as ideas are hatched. Bon!

Breaking down Gaultier’s background into chapters depicted as video vignettes, Jean-Paul’s savoir-faire is manifested in each episode: grade school otherness; first love; relationship with the Parisian fashion scene—“I’m not in vogue,” and move from eccentric to sweet, and provocative to soothing; these will be projected onstage during the revue. Working associates we meet are Cristina Cordula, Marion Cotillard, Catherine Deneuve, Rossy de Palma, and Jean Teulé to name a few. Jean-Paul acknowledges work gives his life meaning; he takes in everything around him, wherever he is, to feed his creativity. “He is like a computer,” says a colleague. Complimentary to associates, and open to suggestions, e.g., better a dancer perform barefoot than stress his foot during the finale, Jean-Paul laughs often, has a ready smile, and really listens – no wonder everyone says working with him is fun. “He is my angel.”

The planning and orchestration is extraordinaire: the high-spirited chorography, visionary designs, and exaggerated makeup and costumes herald a cabaret worthy of the legendary Folies Bergère. Even as guests arrive, work continues behind the scenes; then, lights dim and the cabaret explodes onstage before a transfixed audience. Gaultier’s creative genius is une expérience fabuleuse. Being privy to this insider’s view makes it irrelevant whether someone is a fashion enthusiast. Jean Paul Gaultier: Freak And Chic is a dip into the past, and the making of an icon. French / German subtitles, 96 minutes (Marinell H.)