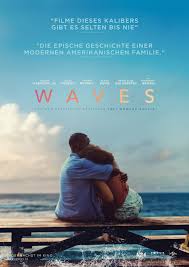 Tyler (Kelvin Harrison Jr.)  is a successful wrestler with dreams of representing his high school in a state competition. He is good-looking with dyed blond hair, which is unusual for an African American. He and his girlfriend Alexis (Alexa Demie) drive around in Tyler’s car, always in good spirits. Tyler lives in a comfortable house in Florida with his father Ronald (Sterling K. Brown), his stepmother, and his sister Emily (Taylor Russell). They seem to be way above middleclass. Ronald is always pushing the family to higher achievements, saying, “We cannot afford the luxury of being average.” They are active church goers; the African-American pastor speaks about “love.” Naturally if everything is perfect, the only direction from here is down and that’s where the film goes: way down. Tyler injures himself during a wrestling match which puts him out of action and into the family drug cabinet. Alexis announces that she is pregnant and plans to keep the child. About 70 minutes (into a 135-minute film) Tyler is practically incompetent and sister Emily takes the lead. She is dating Luke (Lucas Hedges) – a white boy. They take off from Florida and drive to Missouri. Can things get worse?

This is a basic story about people coping with the ups and downs (waves) of their lives. Director Trey Edward Schults says, “Waves follows a rhythm like high tide and low tide. I think that in this way, the film is very similar to real life.” Perhaps viewers will recognize similar problems, relationships, and outcomes, as well as emotions which also come in waves:  sanity, hate, love, crying, laughing, etc. I found that the most powerful waves appear as light or color, as well as waves of music with 32 songs including “What a Difference a Day Makes.” No matter your opinion about this plot, for sure the excellent cast of African-American actors is definitely worth your interest. (Becky T.)