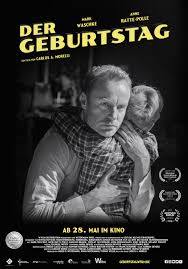 Der Geburtstag, filmed in black-and-white in the former East German city of Halle, is a strange but fascinating movie. Lukas is celebrating his seventh birthday. His mother Anna (Anne Ratte-Polle) has gone all out, preparing a birthday party for the elephant-obsessed little boy. Lukas’ parents are separated and his father Matthias (Mark Waschke) has become less and less reliable, cancelling 8 weekends in a row with Lukas. Matthias arrives at Anna’s apartment before the party to help set up, having forgotten the child’s birthday present at his office and offering vague excuses for cancelling yet another weekend together. But things start to change after the party: one of the guests, Julius, is never picked up, and Matthias sets out in a wild storm to bring the boy home. Over the course of the evening, Matthias and Julius form a bond, sharing one surreal experience after another, which forces Matthias to reconsider his responsibility as a father.

The movie is filmed in a way that feels purposefully old-fashioned and out-of-time: the cars, apartments, and clothing could all be from the mid-20th century. Combined with the black-and-white, it has a film noir feeling, especially when Matthias and Julius traverse the city, having strange and frightening encounters with other people. The dramatic tension feels overly theatrical at times, but makes the movie compelling to watch, placing it in a stylized limbo between family drama and a potentially sinister story. Morelli’s retro movie is a satisfying watch in our own strange times.  (Diana P.S.)