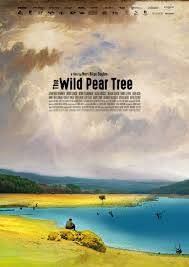 This Turkish drama starts slowly with Sinan (Ahmet Rifat Sungar) who has just returned home from his studies but still needs to take his final exams. He is excited because he has completed a book that he feels is a masterpiece. But he soon becomes disenchanted. After having conversation after conversation, he soon comes to realize that his father (Murat Cemcir) is in some serious trouble. He has gambled all the family’s fortune away and has put the family to shame. He himself wants nothing more but to become an author and even though he has a completed manuscript, where can he find the money to get it published?

The film is very poetic as we are introduced to characters who describe their dilemmas in rural Turkey. All of them seem to dream about living in the big city, but have no financial means to improve their lives. The movie uses heavy symbolism and abruptly jumps into strange dreams so that we, the viewers, are transported into Sinan’s surreal world. This film covers many topics such as a glimpse into the Muslim religion, a woman’s place in society, and what qualities make a famous writer. Don’t let the slow pace of this film get you down it has a surprising ending which will engage your curiosity. 188 minutes (Shelly S.)