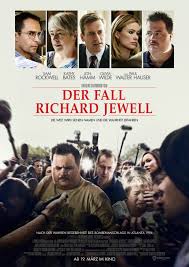 Director Clint Eastwood recreates events surrounding a travesty of justice 24 years ago. Billy Ray’s screenplay, based on Marie Brenner’s 1997Vanity Fair article, American Nightmare: The Ballad of Richard Jewell, tracks how the overnight-hero quickly became the 113th victim of the Centennial Olympic Park bombing, based on no solid evidence. Settle in for an incredibly eye-opening journey; to quote Eastwood, “…as a society, we can do better. If that’s a lesson Richard can give us, I think that’s great. That’s a hero.”

In 1996, the Munich Olympic tragedy lingered in people’s minds, and the FBI were captivated with the profile theory. Richard was convicted in the court of public opinion, yet when exonerated neither the government nor Scruggs proclaimed his innocence. However, Brenner says of her article, “My time in Atlanta, and what happened to Richard, had a profound effect on me as a reporter… Seeking justice for this man became a mission for me…” Der Fall Richard Jewell is timely and yes, the “Miranda rights” scene happened as portrayed and, Richard Jewell really is a hero. 131 minutes (Marinell H.)