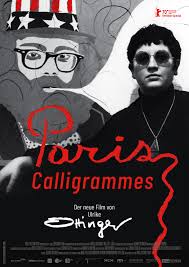 German filmmaker Ulrike Ottinger takes us on a historical kaleidoscopic tour of Paris in the 1960s. She uses archival footage to build up a multi-layered visual collage to elaborate on her autobiography. The film is primarily but not completely black and white footage. As narrator she describes the Paris she loves and entwines it with the local cultural problems and politics of the ‘60s.  Her voice at times is a bit annoying and it feels like she is constantly name-dropping. On the other side of the coin, it is unimaginable how many important connections she had made during this time, truly a very special moment in her development as an artist. I recently heard of the word “sociogram” which is a graphic representation of social links that a person has. A sociogram is the perfect word which describes Ottinger’s visual odyssey. She dives full-heartedly into the subject matter linking her to these historical archives so that we come away with a sense of awe.

She references many places such as the Librairie Calligrammes, a meeting place of exiled German intellectuals which gave her the chance to move in interesting circles and express her love of this magical city. She also shows us the dark side of Paris where many political upheavals began and in the end forced her to leave. This poignant film reflects the current times we are facing with much uncertainly and how will we react with these political and economic struggles. (Shelly S.)