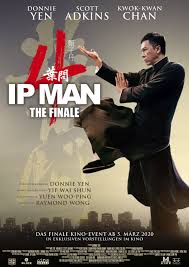 Ip Man (Donnie Yen), the ultimate master of the Kung Fu arts, is approached by a student of Bruce Lee (Danny Chan) despite his fight with the students of Ip Man’s school; he invites him to come to an international tournament in the US. He decides to use this time to look for a school for his son who is having trouble in the local Hong Kong school and hopes this opportunity will give him a prosperous future. In order to get his son accepted in the US schools, he needs a letter of recommendation from the chair of the Chinese Consolidated Benevolent Association who is not happy with the philosophy of Ip Man who believes everyone can learn Kung Fu. Wan Zong Hua (Wu Yue), the chair of the CCBA and also a Thai Chi Master, requests Ip man to tell his student Bruce Lee not to teach Americans the secrets of Kung Fu. He fears they will use these skills against them. Racism is a major part of this film and we see the bad side of America where the Caucasians think they are superior to all other races even in a time period when many immigrants were all arriving at the same time in 1964. Tensions rise between these two cultures as we see US Marine Corp Sergeant Barton Geddes (Scott Adkins) spewing hateful words at all Chinese-looking immigrants as well as misusing his power to abuse the Kung Fu participants. He uses his strength to show that his martial art is superior to those of the Chinese.

The film has great fighting scenes and the storyline is clear and easy to follow. It provides viewers with great insight into the current troubles that the Chinese and other nations have with the US: “A country where supposedly anyone can make their dreams come true.” I really enjoyed Ip Man because he always stayed calm and was self-reflective. He used his acquired knowledge to reconnect to his son so that they had the chance to improve their relationship. I think this was a good ending for the series, but am sad since the fighting scenes and music were inspiring to young people like me. It provides many lessons of life without being too overbearing. (Adrian S.)