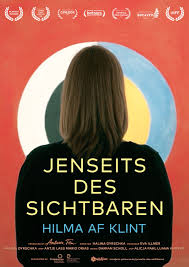 Who is Hilma af Klint? And why has it taken more than a century to learn of her importance in the timeline of artists? Born in 1862 to a maritime family in Sweden, she was lucky to receive schooling in many subjects such as botany, among others; but her love for the arts exceeded them all. She was a woman with extraordinary talents and who graduated from the Royal Academy of the Arts in Stockholm and had won prizes there. Having a strong interest in the mystical world interwoven with science brought her to a new perspective or vision that was far beyond those around her. She is the first documented abstract artist with the first painting in this category dating back to 1906 which predates both Kandinsky and Mondrian’s works. Director Halina Dyrschka takes us back to look at what happened to her and why she disappeared from history. She also takes us forward in time to 2019 where the Guggenheim did a retrospective of her work, and it had the largest number of visitors in its history. So now what? Will the art historians continue to ignore her or try to rewrite history to correct what was lost?

This is a very interesting documentary in which Dyrschka interviews family members as well as searches for answers in archives. The most extraordinary point is that none of Hilma af Klint’s works has been sold. So they are still in one collection which reminds me of the New York painter Alice Neel’s works. It makes me think of how frustrating it must be to the art dealers out there who are searching the world over for lost paintings. This is a film for anyone who is interested in art history or how one person can change our perspective on how we see the world. (93 minutes with German subtitles) (Shelly S.)