Russland von oben (Russia From Above)

Russland von oben (Russia From Above) 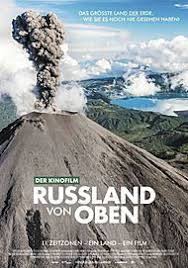 Russland von oben takes us on a journey into extremes, whereby we emerge knowing far more. For example: are you aware that eleven time zones pass through the width of Russia, or it takes the Trans-Siberian Express train one week to travel from Moscow to its eastern terminus? Or, 58% of Russia’s population lives in its northwest European portion, and St. Petersburg’s population is over 500 million? Or, why the Volga Delta is vital to the earth’s ecology? Hint – thousands of birds migrate there during summer/autumn with some flying 3,000 km (1,865 miles). Or, deep taiga forests, rivers, and mountains surround its nicest desert in Siberia, Chara Sands? Would you like to live in a modern city (160,000 residents) with an April temperature of -22.6 Celsius (-8.68 F.)? Russia’s spectacular environment incorporates volcanoes, geysers, waterfalls, the world’s longest river (Volga), deepest lake (Baikal), and Arctic tundra. Curious?

For nine months, using the best aerial cameras available and given unprecedented filming access, the cinematography team assembled footage for this spectacular documentary. Covering over 11% of inhabited regions on the Earth, the gigantic Russian Federation is magnificent; to digest everything covered in Russia From Above a second viewing could be worthwhile. In German, 120 minutes (Marinell H.)