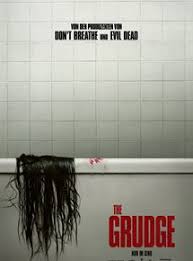 After working abroad in Tokyo, social-worker Fiona (Tara Westwood) desperately wants to return to her family in Pennsylvania. The house she has been staying in seems to be haunted and simultaneously has unraveled her nerves. It doesn’t take long before Fiona realizes that something evil has travelled back with her and has settled comfortably into their home.

Years later Muldoon (Andrea Riseborough), who has just become a widow with a child, needs a fresh start and decides to move into town. Being the new cop on board, Muldoon is a perfect candidate for things to go wrong. Not only is she vulnerable but due to her insecurity in the workplace, she’s impulsively ready to prove herself on the job. Unfortunately, she has a knack for investigating in places where she should think twice before opening the door. Staring down at old newspapers and files, Muldoon tries to solve the series of murders that surround the house without thinking about the consequences.

Based on the Japanese horror-film series Ju-On created by Takashi Shimizu in 2002, this film mimics many of the symbolic elements of its predecessors such as morbid fingers showing up in a victim’s hair while they’re taking a shower or ghosts having hunger even though there is food sitting on the table in abundance, or a dark-haired child waiting at doorway silently.  There are also elements that remind us of Stanley Kubrick’s1980’s horror classic The Shining where a happy couple starts falling apart due to paranormal behaviors in an isolated hotel that alters their personalities and reveals an alternative reality of doom. This film has all the right elements to be another great cult-classic containing strangely disturbed ghosts, horrific-bloody scenes, and ear-piercing screams, and yet something is lacking. Is it that the music at times is overpowering or that it doesn’t fit to the scenes? Is it that element of fear starts to build up but then somehow peters out or never seems to find the right momentum? Personally, I felt that director Nicholas Pesce didn’t have the guts it takes to stay with the true nature of a horror film but decided to make this film an investigation thriller. In the end, it was even more disappointing since I was convinced that The Grudge would finally catch the moment to scare me to death, but no. Instead I decided that all I wanted to do was to take a look at Takashi Shimizu’s early works to put me in the right mood. (Shelly S.)