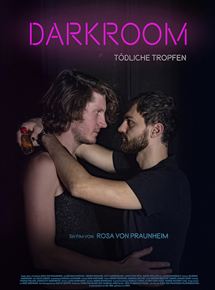 Lars (Bozidar Kocevski) and Roland (Heiner Bomhard) are a gay couple living in Saarbrücken. They move to Berlin and begin renovating their apartment. Roland plays ukulele in a band. Lars is a teacher and also a caregiver in a home for seniors. Unbeknownst to Roland, Lars lives a double life, going out with other men, whom he meets in gay bars. He puts knockout drops into their drinks causing three men to die within three weeks. Twice the victims survive. In the end we follow the court case which sentences Lars to life imprisonment.

Darkroom shows in flashbacks up to 2012 starting with Lars and his first love in 1993. Lars lies about his education in order to work as a teacher; his father has opinions; Lars steals from his grandmother. Based on a true story about a serial killer in 2012, director Rosa von Praunheim has changed the names of the participants. He emphasizes the morbid narcissism which can lead one to extreme actions, something which Lars is unable to explain neither to the courtroom judge nor to himself.

Born in 1942, von Praunheim has made more than 90 films and is considered the pioneer of queer cinema in Germany, starting with his film from 1971 Nicht der Homosexuelle ist pervers, sondern die Situation in der er lebt (The homosexual is not a pervert, but rather the situation in which he lives). Darkroom played at the Filmfest Hamburg and also at the Gay Lesbian Film Festival Hamburg, both in the autumn of 2019. This double showing proves that a good film will appeal to all and sex is unimportant, a topic which was discussed by a panel during the the gay film festival. (Becky T.)