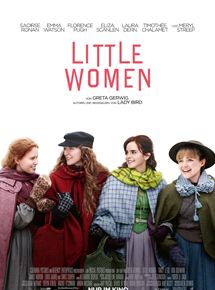 It’s been 150 years since Louisa May Alcott published the novel Little Women, about four sisters growing up in Concord, Massachusetts during and after the American Civil War. An instant commercial success, the book has never been out of print! No wonder, therefore, that numerous movies have been made about the adventures and aspirations of the March sisters – Meg, Jo, Beth, and Amy. This latest movie of Little Women is an absolute masterpiece, impeccably cast with memorable performances from a slew of young actors who breathe fresh new life into this well-worn story.

Adapted for the screen and directed by Greta Gerwig, the film moves back and forth in time, rolling out the sisters’ tales in a way that deviates cleverly from the novel’s linear structure. Gerwig’s film starts off in New York City after the end of the war, where Jo March (Ronan) is in her early 20s and beginning to earn money as a writer by selling her stories to newspapers. And then we’re back seven years earlier in the boisterous March home in Massachusetts, where the four girls cavort and create, and put on plays and recite stories, all written by a teenage Jo. The vivacious nature of the sisters is on full display and attracts the attention of their neighbors, in particular Laurie (Chalamet), an orphaned teenage boy who’s come to live with his wealthy grandfather nearby. The chemistry between Jo and Laurie is instantaneous, and their friendship is at the heart of this story about growing into who you’re meant to be, despite (or perhaps because of) society’s expectations.

Jo’s unwavering resolve to challenge 19th-century limits on women – and to honor her talent as a writer – comes through in a revelatory burst of feminism that is inspired and uplifting. Gerwig has deftly woven various shades of feminism, and a strong affirmation for the importance of social justice in general, throughout this movie. By foregrounding Jo’s determination to become the writer she knows she is, Gerwig has also created an homage to the power of artistic creation and the joy of seeing that determination pay off. There’s so much that works so well in this movie that I’ll stop here and suggest that you go see it for yourself as soon as possible! (Diana P.S.)