Vom Giessen des Zitronenbaums (It Must be Heaven)

Vom Giessen des Zitronenbaums (It Must be Heaven) 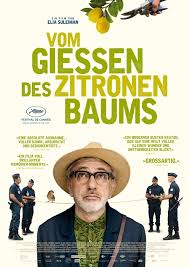 Elia Suleiman sits on his balcony in his house in Nazareth, Israel, looking at his lemon tree, which he occasionally waters. He observes his neighbor sneaking into his garden to steal something. His main occupation seems to be observation – whether from home or from a local café or on the street. Suddenly, he is on the plane to Paris, where he continues to observe from his hotel balcony or while sitting in a café. Strangely, the streets of Paris are empty of inhabitants. Now he watches a woman unloading several guns from the trunk of her car. Where is he? Of course: in New York City, where everyone has guns – correct? And then he is back in Nazareth.

At first glance this could be a documentary. Director Suleiman compares Paris and New York to his own world and discovers that there is little difference. Everywhere nothing is “normal” or dependable – all is “absurd.” We see a priest trying to battle his way into his own church, an angel at a lake, being chased by the police, or two people getting out of a taxi in a deserted city. Everywhere he can sit in a café and observe where “some people drink to remember, others to forget.” He makes friends with a small bird who follows him.

One can view this film more than once. The plot is really just what you want it to be, a creation of your own imagination, which could change with each viewing. There is practically zero text; rarely any background music. This is almost a silent movie, although credit is given to 14 songs. The film, It Must be Heaven, showed 2019 in Cannes and won the journalists’ FIPRESCI prize for best film. Suleiman said that this is his “most humorous film, which says much about the condition of the world.” Yes, because there is nothing humorous about it. Perhaps the main recommendation to view this film is that it provides the opportunity to become familiar with Israeli director Suleiman, whose seven films have appeared at festivals, such as Cannes and Venice and won prizes. (Becky T.)