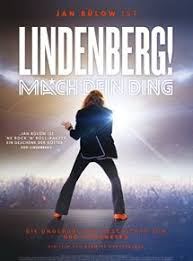 Udo Lindenberg is Germany’s most successful rock musician, song writer, and singer. Now, in 2020 and already over 70 years old, he is still hugely successful with sold-out concerts. He also recently received a German Order of Merit (Bundesverdienstorden/kreuz) for his contribution to public service.

Director Hermine Huntgeburth has made an excellent docudrama of Lindenberg’s early beginning and rise to fame starring Jan Bülow as an adult Lindenburg. We experience Lindenberg as a five-year-old child (Jesse Hansen) growing up in Gronau in Germany’s Westfallen (not too far from Hannover, population under 50,000). He was one of four children of his mother Hermine (Julia Jentsch) and his father Gustav (Charly Hübner), who inherited his uncle’s business, often drank too much and created family unrest. Gustav did not support Udo’s dream of music, as “all Lindenbergs become plumbers and nothing else,” but he did give him a drum set for his birthday. At age 15 Lindenberg (Claude Heinrich) arrived in Düsseldorf to learn to be a waiter in a hotel. He began playing drums in a band and at age 17 performed with this band for US soldiers in Libya. Back in Hamburg, still on the drums, he attracted the attention of manager Mattheisen (Detlev Buck). His first album (in English) is a flop and he runs away to Berlin. Later he returns to Hamburg and plays with his band, now called the Panic Orchestra, in Onkel Pö’s Carnegie Hall nightclub in the Reeperbahn. He records a single of which the B-side, “Hoch im Norden,” is the first step to success. This evolves into a tour “Andrea Doria” (“Alles klar auf der Andrea Doria” is also the title of a song), which sets off his road to celebrity, starting in Hamburg in 1973.

During the film we hear 43 of his 700 songs, all sung by Jan Bülow. We meet three of his former girlfriends: Paula, Susanne and Petra, as well as Steffi Stephan (Max von der Groeben), a loyal band member, who plays bass guitar and still today is connected to the band. There is a discussion about singing in English or in German. Matthiesen prefers English as “German still reflects the Nazi era,” but Lindenberg insists on German, saying, “That’s my language.” Jan Bülow is excellent and quite believable as he evolves into the Lindenberg of today, singing his songs as a young man, and playing the drums (which he learned for the role). This docudrama is similar to films in which a leading actor portrays a famous singer, and also sings the songs himself. I am thinking of Bohemian Rhapsody (Rami Malek singing/acting Freddie Mercury), Rocketman (Taron Egerton singing/acting Elton John), Judy (Renée Zellweger singing/acting Judy Garland) or even Walk the Line from 2005, (Joaquin Phoenix singing/acting Johnny Cash). Director Huntgeburth said that she discussed the making of the film with Udo Lindenberg and “the meetings were very pleasant, very friendly and he always encouraged me to continue, saying that it would be an amazing film. He said that I was doing everything right and he would stand by one-hundred percent.” We in Hamburg consider Udo Lindenberg to be our own friend and neighbor. He lives in the Atlantic Hotel near the Alster Lake and his museum, Panic City, recently opened in Hamburg’s St. Pauli. He is also a successful artist with paintings on sale in Hamburg and elsewhere. The film is definitely worth your interest, but even more so if you live in Hamburg. You might even become an enthusiastic fan if you aren’t already. (Becky T.)