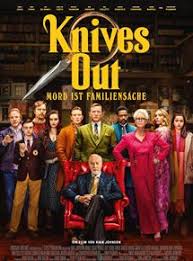 Writer-director Rian Johnson’s (Star Wars: Episode VIII - The Last Jedi, 2017, Looper, 2012) clever, witty tongue-in-cheek whodunit delivers refreshingly fun entertainment. As the Thrombey clan’s devious antics mount, one laugh-out-loud moment trips over the next. Why, for all anyone knows, perhaps the family patriarch wrote Knives Out before his untimely demise.

Another Opinion by Rose F.

Crime novelist Harlan Thrombey (Christopher Plummer) is dead. What initially looks like a suicide becomes more complicated when the famed detective Benoit Blanc (Daniel Craig) begins to investigate. Each member of the dysfunctional family is called in for questioning and the more they speak, the more dirty details are revealed suggesting that there are multiple motives to kill Harlan. Blanc is determined to get to the bottom of things, but even he might be surprised by the conclusion.

Yet again, writer/director Rian Johnson attempts to refresh a genre film by subverting expectations; yet again, the results are disappointing. Knives Out is certainly a slick feature, and under Johnson’s direction the editing is on-point, the sets are beautiful, and the symbolism is thick. On the surface, Knives Out is a well-made, enjoyably old-fashioned whodunit with a superb cast. However, in trying to reinvent the wheel, Johnson stumbles on the most important aspects of such a story by undermining the tension and leading everything to a milquetoast and predictable conclusion. The characters are largely undefined or are merely tropes (the cheating husband, the jealous brother, the greedy grandson, the kind immigrant) are never fleshed out in any meaningful way, leaving no room for emotional catharsis at the end. We never really care much about these people, neither positively nor negatively, and so when they get their just desserts it feels rather bland. Clocking in at two hours and ten minutes, this omission of character development is felt even more strongly, particularly as audiences sit through “the dumbest car chase of all time” instead.

Hopefully, Knives Out will inspire other screenwriters to bring back the whodunit, because it really is fun and there is still life in it yet. However, as a whole this particular entry into the genre lacks the tight writing that is required to truly make it a classic.