All I Never Wanted

All I Never Wanted 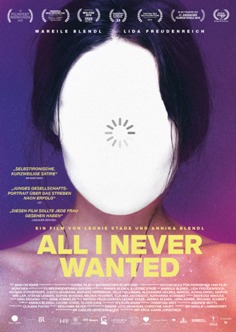 Fiction and documentary fuse in this "mockumentary" that keeps surprising the audience by innovatively blurring the lines between the two genres. One way Leonie Stade and Annika Blendl (directors / script writers) accomplish this is by appearing in their own film as protagonists (under their own names) — as the filmmakers that they are, trying to obtain financing for the very film we are watching.

We follow four women pursuing careers in professions that are perceived as glamorous and desirable. The price for success though is often high, and in these cases it is "all they never wanted". First there are the afore mentioned filmmakers who need to find a sponsor for their documentary about (the other) two women: Nina (Lida Freudenreich), a 17-year-old aspiring model, and Mareile (Mareile Blendl), a well-known lead in a TV series, who needs to restart her career after she lost the starring role to a younger colleague. Scenes in Milan (Italy) are filmed at actual model agencies, castings and catwalks, with people working in the fashion industry. The film's fictional segments appear so realistic that they fit right in with the documentary footage. Though it shows how some men are under pressures, too, this film falls along the lines of the "#MeToo" movement. There is yet another dimension to what women are subjected to. It also includes the complicity of other woman in their exploitation and Leonie and Annika are not above that. Very worthwhile 88 minutes. (Carola A.)