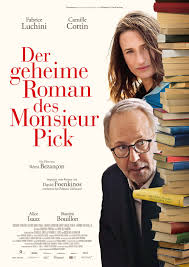 Fabrice Luchini, who we have last seen as 'Un Homme pressé', plays literary critic Jean-Michel Rouche, who hosts a widely watched literary show on television. When Daphné Despero (Alice Isaaz), a young editor, discovers a manuscript in an obscure library in a small village in Brittany, where it was hidden among other manuscripts which all had been turned down by publishing companies, convinces her boss to publish it, and it is raved about as a masterpiece, Rouche, although more than skeptical, invites Daphné and the widow of the author as guests to his show. The author, a pizza baker by the name of Henri Pick, from the village where the library was located, had passed away two years before this miraculous discovery. Nobody, not even his widow or daughter Josephine (Camille Cottin), had known that he had secretly written a novel, and not just any novel, but this masterpiece.  During the interview, Rouche, convinced that this is a hoax, loses his temper and insults the widow, who storms out of the show. As Rouche returns home to his wife, she, who had watched the show on television, announces that she wants a separation and throws him out. The TV company fires him for his unprofessional behaviour. So, Rouche becomes obsessed with proving that he is right about this novel not having been written by Henri Pick, and travels to Brittany to investigate.

The discovery of a novel hiding in a library of refused manuscripts, then turning into a bestseller, is a bit like finding a painting by Rembrandt on a flea market. And so the storyline also is a bit unbelievable and too construed, but nicely acted and entertaining all the same. We follow Rouche to Brittany, and watch him unravel the mystery of Henri Pick and the novel. 100 minutes; French (German subtitles), or German. (Ulrike L.)