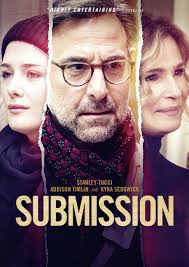 How stupid can you get? Or should I say, how vain and naive can you be? I am talking about Ted Swenson, college professor for creative writing in his late 40s, very convincingly acted by Stanley Tucci. The sad thing is that Ted is not stupid, but instead is bored with his students and discontent with his colleagues at the old-fashioned Vermont college. Despite being an accomplished novelist who does not quite know how to continue with his next novel, he acts superior and cynical. His loving wife Sherrie (Kyra Sedgwick) supports him good-humoredly and acts apologetic toward their friends. Their married life is loving and harmonious.

At work Ted hardly listens to his students until the beautiful and shy Angela (Addison Timlin) submits her story to the class for discussion. Soon she “shyly and demurely” asks Ted to read and review more of her pages, telling him how she loves his writing and that he is “the greatest author that ever lived”. The young girl loses no time by asking her teacher for more favors in her self-effacing manner, making him feel sorry for her difficult life. The novel-in-the making, which she calls “Egg”, is sexy and surprisingly bawdy for such a young girl. Her language used is raunchy; she talks about the slippery hedging of eggs but at the same time refers to the satisfaction of sex with her teacher. Her classmates don't like her writing but their teacher Ted is totally absorbed by this fantasy. Angela is tantalizing him – and – not quite unforeseen, he gives in to temptation. And this is the funniest scene of the movie. Let's call it black humor! It doesn't stay funny but Ted gets the surprise of his life, having to pay a very high price. Lovely Angela's manipulative character is never recognized by anybody else. The ambitious girl has a talent to be reckoned with. Addison Timlin as Angela brings it impressively to the screen.

Writer-director Richard Levine based his script on Francine Prose's acclaimed 2000 novel “Blue Angel”. Even though one knows where the story is leading, diversions keep it compelling. At times it is not clear who is the victim and who the victimizer. In the end Ted has to face up to dealing with his unresolved conflicts of the past. (Birgit S.)