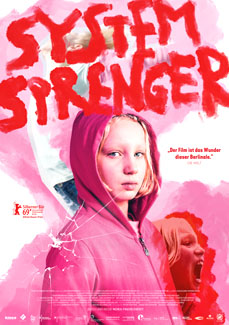 Benni (Helena Zengel) is a nine-year-old girl who suffers from an early-age trauma which left her with an erratic behavior which no one can handle, not even her mother. She drifts through the system of special-education schools, foster families or special residential housing, always with the same end results of being expelled. Her social workers, who actually like her, are frustrated at her behavior as well as with the system that she wants to escape. The film gives a realistic portrayal of people who work tirelessly in trying to give this girl a chance until they themselves find they too are suffering from occupational burn-out. The term Systemsprenger is used for children who can’t cope with stress and are unable to adjust to a rigid system that expects them to fit inside the box. Due to Benni’s age, there are only a few options which apply to her which means her options are very limited.

Nora Fingscheidt described the first time she came across a Systemsprenger in a documentary that she was working on and knew that she had to a make a film on this subject; she only found one young actress that could play such a complex character which was Helena Zengel. It is not a wonder that this film was picked to represent Germany for the Oscars since not only the acting is excellent but the subject questions the society we live in and how we see children and what expectations we have of them. The question is: do the children need to be corrected or is it the system? After the film I spent one hour discussing this very question with two social workers from Cuxhaven who work with children exactly this age. They both were concerned about the situation at hand. They indicated that they have three times the amount of children who are unable to deal with the stress of the schools and since the parents don’t know how to deal with them, they are currently trying not only to help the children, but also, at the same time, do parental counselling since that is the most important factor for the road to success. In this film, Benni’s mother is unable to deal with her daughter and one could see that her two younger siblings seem to be following her path. I am putting money on this film to win the Oscar this year so don’t miss it. (Shelly S.)