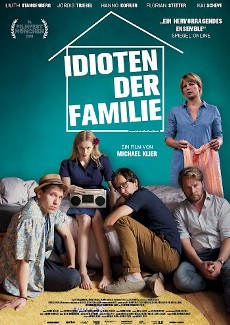 Five siblings spend a weekend together. Frederik (Kai Scheve), Heli (Jördis Triebel), Bruno (Florian Stetter), and Tommie (Hanno Koffler) will say goodbye to their youngest sister, Ginnie (Lilith Stangenberg), age 26, who will move into a home for the handicapped. Since birth she cannot speak, except for singular sounds, or bathe or feed herself. She enjoys watering flowers in the garden, cutting paper, spiders, and her hair with scissors, and disappearing. In 102 minutes the four siblings review their lives, both past and present, always interrupted by Ginnie, who is naked again, throws silverware, or falls unconscious. Since their parents passed away, Heli, age 40, has devoted the last eight years of her own life to care for her sister in their family home near Berlin. Now she wishes to get married and pick up her career as an artist. Bruno wants to take a job in Africa. Frederik has become a successful musician, compared to Tommie, also a musician, who seems to have failed.

That’s it. There is much repetition and little progress, except to wonder, as the title suggests, who is the real “idiot” in the family? On the other hand, as the story progressed, I recognized that I am indirectly related to a similar family of seven siblings, which also had to come up with a solution for the care of a handicapped brother after the death of the parents. Naturally, these German actors are excellent, well known from other recent films, but otherwise, one could tell the story in 20 minutes. Director Michael Klier calls his film a Kammerspiel – or a play; with its small cast, it could very well play in a theater – perhaps more successfully.  It will eventually show on the ARTE TV channel, one of its supporters of the making. (Becky T.)