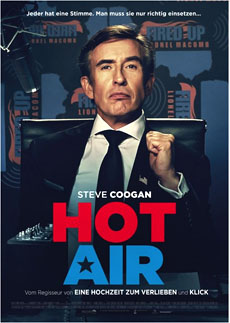 Even those who don’t like change, can’t run away from it. And things are changing for right-wing radio pundit Lionel Macomb (Steve Coogan). His ratings are taking a hit, due in no small part to his former protégé Gareth Whitely (Skylar Astin), who would seem more at home behind the pulpit of a TV megachurch than rising radio star. If that’s not enough, his niece Tess (Taylor Russell) shows up on his doorstep looking for him to give her a place to live. She’s smart, doesn’t share his opinions and doesn’t shrink from saying what she thinks.

If this is one of those stories where the heartless finds a heart, it wasn’t very convincing. While Lionel expresses the usual right-wing rhetoric, the frequency of his on-air diatribes are too few to make much impact. His subdued performance paints him as more of a run-of-the-mill pompous jerk than the bombastic bigots we are accustomed to yelling at us over the air. Although, his melt-down speech was pretty good.

He and Tess seem to orbit in separate worlds, Tess develops more of a relationship with his girlfriend, Valerie (Neve Campbell), than she does with her uncle. There just isn’t enough interaction to result in any kind of transformation. The actors delivered solid performances, the weakness is in the screenplay. There isn’t enough depth to deliver any life-changing moments. Overall, it’s a weak depiction of a familiar theme. (Anne C.)