The Whale and the Raven

The Whale and the Raven 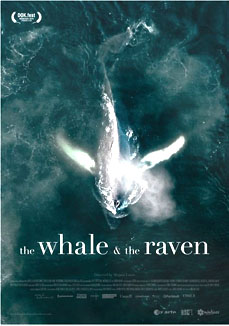 In this beautiful and moving documentary about a group of whales which regularly migrate through the picturesque Hartley Bay in British Columbia, director and writer, Mirjam Leuze follows the life’s-work of Canadian Janie Wray. Wray is a marine biologist, Orca specialist, and marine life activist who has spent the last 20+ years studying and documenting the acoustic songs and daily lives these mystical creatures. Her once-husband and partner, a German-born whale expert, Hermann Meuter, works day and night to catalog the migration and habits of the whales. A true labor of love. In truth, their mutual dedication to their whale work actually cost them their marriage. The documentary explains that Wray left Meuter as the endless hours of solitude began to take a toll on her.

Leuze also documents how modernization negatively impacts the lives of the orca and other whales. Decades of shipping traffic along the Gitga’at community’s waterways has brought significant terror and life-threatening noise pollution to the whales’ home. A good portion of the 101-minute documentary is devoted to explaining the controversy surrounding the dangers of the shipping and oil industries. In particular, the Northern Gateway Pipeline Project presents an imminent danger to the whales which inhabit this region. The project, which plans to transport crude oil from the oil sand fields in Alberta to the coastal area of Kitimat, the ancestral home of the Gitga’at. The team works tirelessly to demonstrate how the underwater noise pollution of the super tankers scrambles the sonar songs the whales produce to navigate the waters and communicate. The result is perilous for the whales.

The documentary sweetly shows the reverence the Gitga’at community has for their whale family. Wray and Meuter’s acceptance and adoption to the Gitga’at nation in 2017 is a testament to the trust that Helen Clifton (a local tribal elder of the Gitga’at nation) has in their commitment to the cause. Wray became a part of the Gisbudwada (Orca) Clan whereas, Meuter was given a name in the Ganhada (Raven) clan of the Gitga’at people. Hence, the name of the film.

The documentary, directed and shot by Leuze, shows the hardships of protecting the whales and the ever-losing battle of the indigenous people to “say NO to oil tankers”. The real stars of the film are the whales and the pristine landscape of Hartley Bay. The only negative point is that a great shot of a whale cresting above the sea’s surface is missed due to the delayed response of the cameraperson. But maybe that is indicative of just how precious each whale sighting, especially nowadays, really is. (Ericka S.)

Another opinion by Shelly S

With stunning cinematography, German director Mirjam Leuze catches a species at risk, both the Orcas and Humpback whales, whose territory is in the waters of Northern Canada. On this remote island is a small First Nation village that needs to survive. Many of them are tempted by what the modern industry will bring to them financially. On the other side are two whale researchers and others who are fighting to preserve the peaceful life that is essential for the existence of the whales who are extremely sound sensitive.  The large container ships send of a sound under water that affects these mammals in a very disturbing way.

This is not the first time that big investors have tried to use the region. The last time the community was united and the question is: will it stay that way? It is an absolutely beautiful film describing yet another globalization story where animals are fighting to survive, while we humans are thinking only short term and want to take resources no matter what the costs. The film is important, because you can witness how much these researchers’  love for these animals is and how they have been able to get so close to them. Cinematography is by Mirjam Leuze, Mike Dinsmore, Athan Merrick, Simon Schneider, Tavish Campbell.