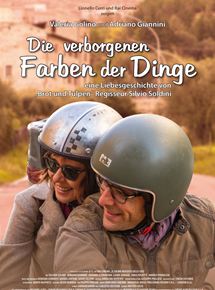 Teo (Adriano Giannini) has everything, so it seems: devilish good looks, a girlfriend who he is about to move in with, a hot affair with a married woman and a successful job in marketing. Yet, he appears to be a lost and unhappy soul.

When he meets Emma (Valeria Golino), he is swept right off his feet. Emma is a strong and independent woman. Though Emma is blind, she does not let that define her. Fascinated by her sensual perception of the world, explaining to Teo that she understands the world in its depth rather than its outside shape and colors, he finds himself entangled in an inspiring world so unlike his own. Teo falls more and more for Emma, who is comfortable with who she is and the life she has created for herself, so different from himself. The two seem so different, yet their attraction makes room for hoping they could have a happy end.

Despite Teo's emotional shortcomings, his character is depicted in a way that makes him extremely likeable, and watching this film I kept rooting for him, to snap out of it and finally realize how beautiful his relationship with Emma really is, what happiness could really be. Yet, you also think he is a lying cowardly bastard and wish Emma would realize sooner: a rollercoaster of emotions.

The scenes of this movie are beautifully compiled, and the calmness of colors and sound make this an almost meditative experience. Without much action or excitement, the individual frames in its cumulation draw the viewer into the idea of understanding world's depth rather than superficial perception – mirroring Emma's world. Brilliant. (Karen M.)