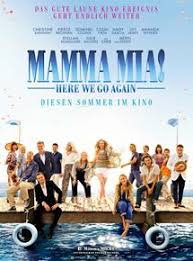 ABBA fans will love it. Those songs from a long ago era are as magical as ever. The soundtrack and the actors performing in spandex are not just the glue but also the glitter that breathe life into a rather weak storyline. Bjorn and Benny even make not so fleeting, and rather endearing cameo appearances.

Aficionados of the Mamma Mia (2008) film won’t be disappointed. Almost the entire original cast is back, now including prequel versions of their much younger selves. Prequel meets sequel, confusing, yes a little. Sometimes young Donna (brilliantly played by Lily James), almost melds into her daughter Sophie (Amanda Seyfried), but perhaps that is deliberate. Cher makes a grand entrance as Ruby, Donna’s extravagant mother, but really she’s still Cher. And the question looming over the entire film is: what has happened to Donna, (Meryl Streep) the original Mamma?

The movie is slow to start, but improves as it ages, much like some of the vintage characters including Sophie’s three fathers (Pierce Brosnan, Colin Firth, and Stellan Skarsgård). Halfway through, the film becomes outrageous and campy, finally able to make a little fun of itself. That’s when Mamma Mia! Here We Go Again becomes delicious to watch. (Pat F.)