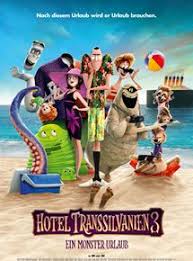 Seeing her dad being overworked Mavis (Selena Gomez) decides to invite everyone to a luxury monster cruise ship. The ship contains everything a monster could wish for: daycare for children, tons of food, underwater volcanoes and the Lost City of Atlantis with the most dangerous and famous creator of them all “The Kraken.” Vlad falls in love with the mysterious captain of the cruise ship which makes Mavis suspicious. Trying to hide his feelings for the captain from Mavis, he secretly goes on a date with the captain which gets interrupted by Mavis. Since all the monsters are having fun, Ericka and her great grandfather plan the assassination of Vlad. This is a long family tradition since the Van Helsings always fought against Vlad being monster hunters. Ericka just knew about her great grandfather’s view of monsters, when she notices that they might not be as bad as he says.

This movie is a hilarious comedy, an animated kid’s movie. I really enjoyed it because it has a very unique sense of humor, and it is the first animated movie which involves a cruise ship ever. The characters all have their own types of expressions which make each one of them very special and just add to the great plot. Since it is different from the other two Hotel Transylvania films, it is a great experience to see the many new ideas like underwater volcanoes or the Great Kraken. The music is awesome as always. My favorite part by far was the music battle between Van Helsing and Johnny. The beat was really good and the humorous scenes were very good as well. All in all I liked this movie a great deal and would recommend it to all families and kids. (Adrian S.)