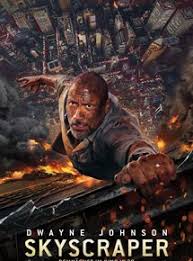 We certainly all remember a fire drill in elementary school, but what happens if you are on a skyscraper with 240 floors and you live close to the top! Here is a 3-D action thriller that makes the fantasy world catch on fire.  A Chinese tycoon played by Chin Han decides to build the world’s tallest building and is extraordinarily beautiful and carries the name the Pearl. It is no ordinary skyscraper which implies that it uses modern technology that makes it seem that it has unlimited possibilities. This futuristic building is Han’s pride and joy and therefore it is only natural to hire a man who could prove that it will withstand a major fire. Will Sawyer (Dwayne Johnson) has been hired to test the computer system and structure of this building; he received a luxury benefit that his wife Sarah (Neve Campbell) and their two kids are allowed to join him. The whole thing ends up being a set up and, before he knows it, he is about to be framed when the building goes up in flames. There is only one problem, Will’s family is stuck in the building and so he makes a decision that changes the course of his life as well as that of others who get in his way.

The film has great stunts and the special effects are exciting and interesting. The film does spend a bit too much time on how much Will loves his family which indicates that they need a better script writer behind the scenes. The music definitely keeps the movie going as do the visuals. I think the average person will like this film but they should not count too much on a serious storyline underneath it. It would have been interesting to know a bit more about the underground world. Most of the characters are flat and we really don’t feel one way or another when they are killed or trapped. It is the technology that makes this film interesting but unfortunately not the characters themselves. (Shelly S.)