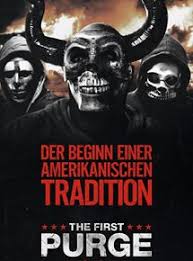 The First Purge shows the idea behind The Purge trilogy. For 12 hours all crime is legal and won’t be punished. The founding fathers decide to test this very bizarre idea on Staten Island to benefit the economy. You may ask yourself why would anyone be so crazy and stay on that island during that time period? Well the answer of course is Money! The government promises to give money to each and every citizen if they are willing to stay on the Island during “The First Purge Night.” This is extremely appealing to lower class people and the homeless. Once the Purge starts, not much seems to be happening until someone is murdered while trying to steal money from a bank. This was just the beginning. After the government notices it is not going as planned, they send military troops masked as civilians onto Staten Island to start genocide of the lower class people.

I really liked this movie because it reveals the principal idea behind The Purge trilogy which I didn’t know. It also showed why the government was so involved in the Purge Night and makes you understand the logic behind using the Purge Night to kill political opponents, for example. The costumes and the masks are fantastic. I like that it is also was not too brutal like the other Purge films because this was just the beginning. The thought of the Purge Night being a psychological experiment I enjoyed a lot because it really makes you think: would you commit a crime, if it is legal, or would you go to a party like many citizens did during the night? All in all, this movie really knows how to make you jump and scare you enough that you are thinking about it all the way home in the dark! (Adrian S.)