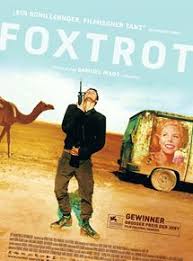 Architect Michael Feldman (Lior Ashkenazi) and his wife Dafna (Sarah Adler) live in Tel Aviv. Two representatives from the military knock on their door. Dafna senses the reason behind the visit and faints. Michael receives the sad news that their son Jonathan has died in action. He falls into a state of shock and acts unreasonably, almost crazily, hitting the dog, pouring boiling water onto his hand. His brother Avigdor (Yehuda Almagor) keeps a clear head and plans funeral services. Five hours later there is a new report: there was a mistake; Jonathan is alive and well. Michael suffers a panic attack and demands that his son be allowed to return home immediately. We then shift to Jonathan (Yonatan Shiray) who, with three other soldiers, is guarding a no-man’s land, border check point between Israel and Palestine. Life is isolated, far away from any military action; to counteract boredom one of his colleagues dances the foxtrot in the desert. Jonathan learns that he is allowed a home visit. In the meantime his parents pick up the pieces of their shock and concentrate on their daughter Alma (Shira Haas).

Director/writer Samuel Moaz said that he was thinking of a Greek tragedy told in three sequences as the ideal platform to realize his ideas. Here the foxtrot is symbolic of fate, coincidence and destiny. It is two steps forwards, one step sideways, stop, and then the same movements repeated backwards, all in a small continuous square. It is also a symbol of the conflict in the Near East in which there is no progress or even any “movement,” as well as the inner conflicts which Michael suffers and says, “No matter where you start, you always end up at the beginning.” Michael and his son both have experiences in the military.  Michael visits his mother in a home and she, a survivor of the Holocaust, speaks German with him. Therefore we have three generations of Israelis who have endured war experiences. Michael reacts with sadness, insecurity and trauma, which the film transfers strongly, without the aid of much background music and or even text.

Foxtrot makes a deep impression for which one needs time to think and analyze. It awakes personal perceptions which aren’t necessarily topics for discussion or comparison, but sink into one’s own mind to relive again and again. How would I react? Does this portray my life? It is definitely an important film, which one should view more than once. Foxtrot won a top prize at the 2017 Venice Film Festival and was nominated for an Academy Award. (Becky T.)