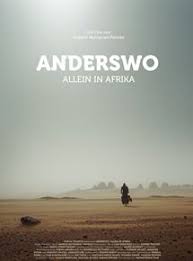 Anselm Pahnke, a 25-year-old student from Hamburg, planned a bicycle tour through Africa with two friends. They started in Cape Town but the two friends soon decided not to go through with the adventure. Anselm debated with himself.  Should he also return home or did he have the courage and stamina to continue on his own? He did continue and the film takes us along on his journey (sleeping rough and never buying bottled water) through the Kalahari and Sahara deserts, up to Zimbabwe, Uganda, Kenia - all in all 15 countries and several climate zones, 15,000 kilometers in 414 days - ending in Egypt.

Anselm films while riding and interacting with the local populations which gives us glimpses of life in Africa and it is astounding with what sensitivity he films, never being invasive of anyone's privacy. The nature we are exposed to through his camerawork is stunning - waterfalls, plateaus, deserts, and wildlife ranging from herds of large animals down to tiny lizards and butterflies. One suffers with him when there is a lack of water, when he contracts malaria and typhus and when he must travel through no man's land. But we are also amazed at his self-reliance and his acceptance of all these obstacles.

The recurring theme is acceptance - not just acceptance of other cultures but acceptance for who you are and learning to live with yourself and for the moment. Anselm realizes that being on your own and loneliness are not the same thing. (Thelma F.)