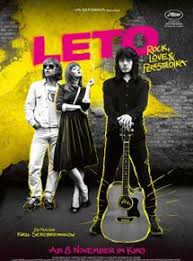 In the early 1980s, there was a seminal movement beginning in Leningrad; Russian Rock was being established. With its strong Western influences, by its very nature the music was political in a country which strictly prohibited such art. LETO follows the early friendship of two pioneers of the genre, Victor Tsoi and Mike Naumenko as they develop their style and deal with interpersonal conflicts.

Director Kirill Serebrennikov paints a rather light-hearted image of these early days of Russian rock. The Soviet state with its strict restrictions on performances seems like merely a mild annoyance. Far more central to the conflict here is the love triangle between Tsoi, Naumenko, and Naumenko’s wife Natalia (Irina Starshenbaum), which really seems a little trite when compared to Tsoi and Naumeno’s writing and performances. Not much really happens in LETO. Tsoi and Natalia flirt with each other, Tsoi and Naumenko talk about music, a few songs are performed and that’s it. As just a light piece of cinema, it is visually cohesive, introduces audiences to a genre of music which may have been previously unknown, and generally just good fun. However, if you are looking for an accurate portrayal of the struggles of early Russian Rock pioneers or even a more in-depth analysis of Victor Tsoi’s early life, it won’t be found here. (Rose F.)