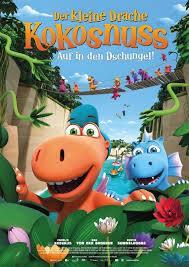 okosnuss (Coconut) and his friend Oskar are on their way to summer camp on a jungle island. Although a specialty camp for fire dragons and gorge dragons (Feuerdrachen, Fressdrachen), they ignore the rules and smuggle their porcupine friend Matilda onto the boat. Also on board are Chef, the cook, Miss Proselinde, the teacher, and Kokosnuss’ father Magnus. Three dragon sisters, Ananas, Mango, and Pampelmuse (pineapple, mango, and grapefruit), and dragons Desirée, Dennis and Dirk come along. Naturally the trip does not go smoothly, ending with the boat ramming a cliff and sinking halfway, a foot march into the jungle, strange dragons speaking unfamiliar languages, separation from the group, and, worst of all: a meat-eating plant which loves to chew on dragons. Two new friends appear: Wokk – a young water dragon – and Amadeus – an experienced sea dragon.

This is a sequel to Der kleine Drache Kokosnuss – Feuerfeste Freunde, which showed in 2014. Both are based on popular books by Ingo Siegner. Although much is discussed about the camp, the group arrives only after 54 minutes into the film, but still can’t settle in. It’s all about getting there. The story emphasizes the value of friendships in spite of misunderstandings and contrary opinions, important messages to children five years and older, as well as to the whole family. At 83 minutes, the film seems too long and becomes repetitive in parts. However, the colors and the music are so good, that we can forgive this problem. The various dragon ethnic groups are identifiable in colors: blue, pink, orange, or lilac. The jungle is gorgeous. The fun, jazzy, jive-y music comes from Young Chinese Dogs, a German (in spite of the name) pop band from Munich. (Becky T.)