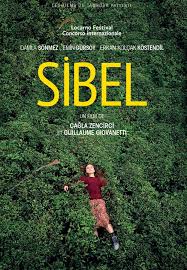 Sibel (Damla Sönmenz) lives with her younger sister Fatma (Elit Iscan) and her father Emin (Emin Gürsoy) in a small mountainous village in Turkey near the Black Sea. Emin is the mayor of the village and also has a small shop. Fatma goes to school, although these days might be numbered as she is a likely candidate for marriage. Sibel is 25 years old and helps her father; there is no longer any mother in the house. Sibel also works in the fields with the other village women and brings food to elderly Narin, who is confused and believes that her fiancé will reappear after all these years. After suffering fever as a child, Sibel can no longer speak. She communicates in a language of whistles, which the villagers understand. Due to her handicap, Sibel is an outsider; this prevents her from interacting in the small conservative community, but at the same time, allows her to overstep certain boundaries and make her own way. She often goes into the forest with a rifle (a present from her father) to look for the wolf which terrorizes the population. She has a small hut in the forest. One day she discovers Ali (Erkan Kolçak Köstendil), an injured soldier who has gone AWOL. She sets him up in her hut and treats his injuries; this is her first encounter with a man, a rare occasion as her culture prevents women from interacting with anyone outside of the family.

The film Sibel definitely deserved to win a prize at the Filmfest Hamburg, as well as prizes at other festivals such as Montpellier and Locarno. Directors Zencirci and Giovanetti visited the actual village Kuşköy where this whistling is truly recognized as a language practiced by the villagers to communicate. They said, “The whistled dialog in the film is real, and Damla Sönmenz learned the language from a whistle-language coach.” The whistling reminds one of birds in the forest. Background music is unnecessary except at the opening and the ending for the credits, so that we can concentrate without interruption as Sibel grows into probably the first emancipated woman in her archaic environment. (Becky T.)